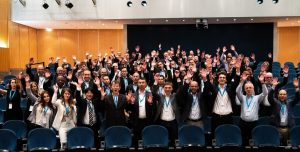 In March 2006, a group of SAP Value Added Resellers came together in a small meeting room at CeBIT in Hanover, Germany. The plan was to form a global community of partners that would support small and medium-sized enterprises in implementing international SAP projects. The group’s vision was to be able to help customers deal with their business objectives across all of their operations internationally, by providing them with in-country partners familiar with local and legal requirements, and with specific industry knowledge.  And so it was, United VARs was founded.

Before the 2006 meeting, Alejandro Daniel O’Davoren from Seidor had met with All for One. “We were struggling to know how to serve our customers in their subsidiaries abroad, but none could face a complex and costly global expansion on our own. The solution became clear, we would create a powerful network of SMB partners. All for One would act as Seidor in Germany, and Seidor as All for One in Spain. The idea was simple but needed to be based on one main feature: full trust in our members. We built a network starting with a few members, carefully adding new partners over the years and this has led us to what we are today.

“I remember that day in March 2006 when the first six members came together to initiate the United VARs contract, and we immediately started searching for more members all over the world. In 2007, Answerthink in the US joined and in 2008 and 09, the first members from APJ joined us. Today, we are 56 members in almost 100 countries all over the world.

Looking back over this time, Detlef said that there were two major milestones for United VARs. “In 2011, we decided to establish a legal entity to improve the awareness of United VARs and five years later in 2016, we became one of 10 SAP Platinum Resellers. However, if you’d told us in 2006 that United VARs would become the biggest SAP Reseller, no-one would’ve believed it. But actually, we made it! AND we received two Pinnacle Awards in the last three years. “

Niklas Lindefelt, Co-Founder of Implema, SAP Partner in Sweden was also there in 2006 and he said that becoming a partner of United VARs in 2006 was a “no brainer”. “We had met with Lars from All for One, Alejandro from Seidor and the others at a round table discussion with SAP and it was obvious from the start we shared the same challenges. We also shared the same passion for helping our customers get the most from their SAP investments and therefore the idea of United VARs was brilliant from the start.”

Niklas continued by saying that one of United VARs biggest advantages is its international reach. “Sweden may be a small country, but we have many companies with international operations and as a part of United VARs, we have access to support and expertise from all around the world. In the last 15 years, we have been running many projects in Sweden and abroad in cooperation with many other United VARs’ partners. Many of these projects wouldn’t have happened had it not been for our strong alliance of SAP solution providers and its significant global outreach. In this respect you could say United VARs is part of our growth strategy.

“Fifteen years ago, six SAP solution providers founded the United VARs global alliance with a charter to support international SAP projects with a focus on midmarket customers. Today it is my great pleasure to congratulate United VARs, a global reseller and SAP platinum partner, and their more than 50 members around the world on their 15th anniversary and to wish them many more years of success.”

United VARs is an SAP platinum partner, the highest level in the SAP® PartnerEdge® program and forms an alliance of leading IT solution providers in approximately 100 countries to guarantee the best service and support for your international SAP implementations, ERP optimization projects, and cross-border nearshoring.
Follow Us